The benefits of Humic - Fulvic (Humates) for Humans and Animals 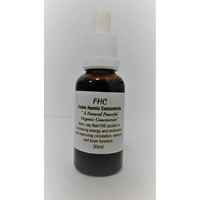 Fulvic acid has been call the “Elixir of Life” or Nature’s perfect medicine. Research into humic and fulvic acids have found them to be very beneficial, if not vital for human health, animal health and the health of the soils that grow the pastures for animals and or Horticultural/Agricultural crops .… the food we eat.

The benefits of Humic-Fulvic (Humates) for Animals and Humans

Humates (from “Humus”) are made from the decomposition of plant matter, over many thousands of years. As decaying plant matter, humus, is decomposed by microorganisms and can eventually become coal or a soft, shale-like material called “Leonardite”. The majority of the Humates we supply come from New Mexico, USA and are among the world’s best quality, being specifically selected on site. Our “Leonardite” is free of heavy metals and is loaded with Humic acids (min. 70%-80%max.  Humates also supply trace elements, amino acids and plant derived nutrients that are often deficient in the soil from modern farming practices.

Humic substances are broken down into humic acid and fulvic acids. The Fulvic fraction/component in our Certified Organic Leonardite is approx 30%, perhaps the highest available in the world. Research into humic and fulvic acids have found them to be very beneficial, if not vital for human health, animal health and the health of the soils that grow the pastures for animals and or Horticultural/Agricultural crops .… the food we eat.

The Benefits of Humates

Humic acids build up the immune system and are important for overall health and vigour. Blood cells carry more oxygen in the presence of humic acid which leads to injuries healing more quickly. Humic acid aids in transporting iodine from foods into the thyroid. Humates block or reduce the production of stress causing hormones and work with DNA and cell division, preventing cellular mutation during reproduction. Humates/fulvates seem to supress the “bad” microbes and stimulate the “good”. Fulvic acid is the world’s finest electrolyte.^

Fulvic acid has been call the “Elixir of Life” or Nature’s perfect medicine. Benefits include…

Trials with Fulvic/Humic in Animals:

In a test herd of cows, cases of mastitis dropped from 3 – 4 cases per day to 4 cases in one month. (See 1 below) In another herd of cattle, volatile ammonia in the animal waste decreased by 64%. There was a reduction in odour and an improvement in the NP ratio in the waste. Examination of the waste showed a more complete digestion of food. The urine of those animals on humates was clear and odourless while the control herd had strong smelling amber urine.

In Texas, a herd of 500 cows trialled on humates over 28 days. The milk production, blood and waste of the herd was examined before, during and after the introduction of humates.  The cows produced 1.9 lbs of extra milk daily per animal but their daily feed consumption dropped from 38 lbs per day to 36 lbs. The cows were digesting their feed more completely resulting in both a smaller need for feed and a higher milk yield. It was also noticed that the cows on the humates were far less aggressive when feeding, calmly eating their rations while the control herd ate greedily and aggressively. A reduction in heat stress was also observed in the cows on humates. The lactation decline curves were flattened, meaning that the farmer was gaining a longer milking period from each cow. The manure of the test herd had less odour and less ammonia.

In another trial in Texas, a farmer mixed humates into the feed of three calves and one cow. After 60 days, the colouration and health of all four animals was excellent and the calves had an above average weight gain. An added bonus for the farmer was that the cow became pregnant during the trial; he had been trying without success to get her pregnant for three years.

In cutting horses and racing quarter horses, healing times for ankle injuries in horses on humates have been reduced by 1 – 2 weeks and the horses have performed better in timing trials.

In Texas, a horse with severe hoof degeneration was put on humates and the hoof grow out amazed the farrier. The horse was able to be shod and back in the show ring in 4 – 5 months. Some horse owners have reported their once unmanageable horses becoming beautifully behaved at shows once they are put on humates. Note: All show animals have all been observed to be calmer and less affected by outside stimulus in the show ring.

De-Tox advantages: Humates were administered to a group of test mice for 10 days. Then they and a control group were given toxic doses of strychnine. All of the control mice died while all of the mice on humates survived.

Humates act as a substitute for prophylactic anti-biotic, produces a substantial increase in the bioavailability of nutrients and appetite, reduces mortality, increases live weight, increases resistance to diseases and environmental stress, reduces smell of faeces and urine/body odour, reduces scouring and produces leaner meat. See 2 below

The use of Humic acid resulted in a higher quality of meat. Humates showed a higher affinity for AFB1 (Aflatoxin B1) and was effective in diminishing the adverse effects caused by aflatoxins on the body weight of Broilers. Humates also increased Calcium levels and body weight gains, with protective effects against liver damage and stomach and heart enlargement. See 3, 4, and 5 below

In humans, humates have been shown to be effective against Coxsachie virus A9, herpes simplex virus 1 + 2, HIV, Influenza Type A and B and other respiratory tract infections. Humates help with anaemia and toxic hepatitis.

Other benefits noticed by people taking humates include

Humates have been described as being essential to life and are sadly lacking in most Australian soils. In our ancient Australian soils, Humus content is down to 1.5% whereas it is estimated that 200 years ago (upon the settlement of the white man), Australian soils had approximately 4.5% Humus content. We need to add more Humus to our soils and, if we want peak health and performance in our animals, we need to be supplementing their diets with humates.

Probably the most co

10 December 2015
Probably the most common ways to ahveice a healthy lifestyle is thru taking . As the name suggests, these items supplemental dieting and are basically causes of added nutrition that you would have otherwise missed because of the type of life many men live today. Thanks and more power!